Tucked away in the midst of the busy Whakapapa skifield at Mt Ruapehu, where thousands of people enjoy a sunny winter's day, is a tiny red hut sited near the top of the first chairlift.

It is Glacier Hut which was the first building anywhere on the upper Ruapehu snowfields when it was built in 1923. The nearest other building was at low level, 10km away down the mountain where the Chateau stands today.

The six-bunk Glacier Hut was erected by members of the Ruapehu Ski Club who carried all the materials up the hill on their backs or by pack horse.

It was hard work, especially when the hut builders were hit by unseasonal summer blizzards and had to huddle in a freezing cave in Skippers Canyon until the gale passed.

The new hut was immediately popular and ski club members often slept there both in the winter ski season and in summer when they climbed to the crater and skied down the Whakapapa Glacier.

Alpine climbers sometimes stopped there for a break on their 14km hike from the low level Whakapapa huts to the crater.

One morning there were 60 members in a climbing party who had stopped at Glacier Hut and used its kerosene stove to cook their breakfast. “You couldn't tell whether you were eating from your own fork or that of someone two feet away from you,” a climber is alleged to have said.

The famed New Zealand cartoonist (Sir) Gordon Minhinnick also had a story about Glacier Hut. He and a friend were bunking down on a cold night when there came a knock at the door, and upon opening it they faced a horse with a woolen beanie on his head.

The horse's owner turned out to be a prominent ski club member, Horace Holl, who wanted to stay for the night. The trio bedded the horse down an the lee side of the hut and retired to their bunks. So why the beanie? The horse, said Holl, had earache.

Glacier Hut enjoyed 13 years in magnificent isolation until the Ruapehu Ski Club built a larger 12-bunk hut nearby in 1936. Even larger ski lodges as well as chairlifts and T-bars began to appear in later years and these now surround the scene.

In the wake of this the Tongariro National Park Board declared the tiny old hut to be an eyesore and demanded its removal.

Ruapehu Ski Club members fervently resisted this and after a campaign by the ski club that lasted 25 years, Glacier Hut was officially gazetted by the Historic Places Trust in 1993 as a Category One Historic Place – the highest category.

Today one half of the hut is furnished as it was in the 1920s and the other half is maintained by the ski club as a skiing museum containing vintage ski clothing and ski equipment, most of it pre-war.

Pride of place goes to a pair of 101 year-old skis which were used in July 1913 when two railway clerks, Bill Mead and Bernard Drake, were the first people to ski anywhere in the North Island .

Frustrated with their inability to make progress around Tongariro National Park in winter, they imported two pairs of wooden skis from Switzerland and tried them out at Ruapehu.

Just four days after their first day of skiing, Mead and Drake founded the Ruapehu Ski Club which today has 1700 members and owns four large accommodation buildings at Ruapehu, as well as Glacier Hut.

After Drake was badly injured in World War One, he did not ski again and donated his original skis and his single ski stick (they used just one) to the ski club.

One last tale. In the 1930s a ski club member at the AGM queried the balance sheet asset listing of Glacier Hut, as he had visited the site and could not find it, due to a heavy snow cover. “It is,” replied the Treasurer, “A frozen asset.”

++ The wee hut was slightly enlarged in the 1940s. A second window and a new porch were added.

Here's a Google map of Hutt Flat, showing the Hut, the Lodge and Glacier Hut: 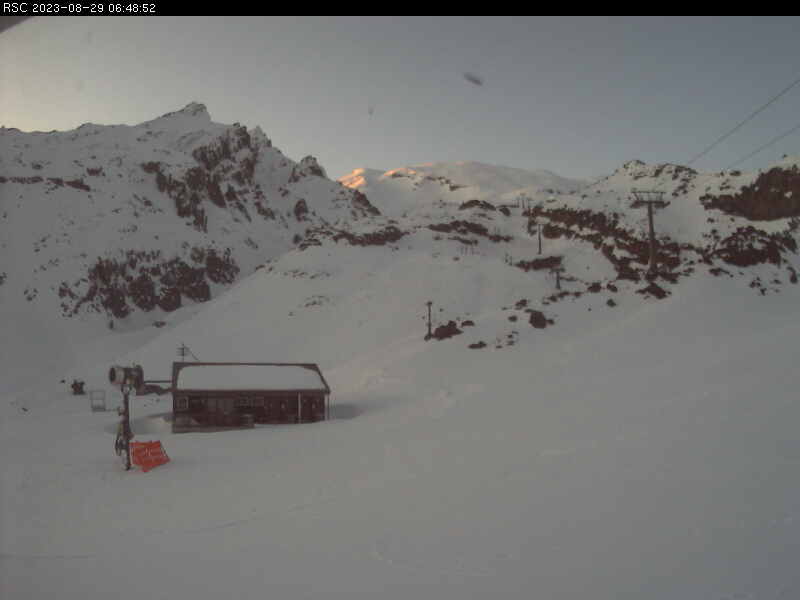